For a few hours Tuesday evening, I was a descendant of José Antonio Navarro. At least, it certainly felt that way.

I was fortunate enough to be at a special celebration at the place the longtime patriot called home – Casa Navarro. More than 150 people, many of them family members, gathered for a preview reception at the state historic site which had been closed more than a year for a comprehensive renewal and restoration.


It was practically a nirvana-like experience to be in the middle of so much happiness. So many things that I love about San Antonio came together in a perfect storm. Art, music, history, downtown, Mexican food and architectural preservation all swirled together on a balmy, 70-degree evening.

While many San Antonians may only know Navarro as a street downtown, the statesman played a major role in the Texas fight for independence and its statehood. He was one of only two Tejanos to sign the Texas Declaration of Independence and he served two terms in the state Senate. 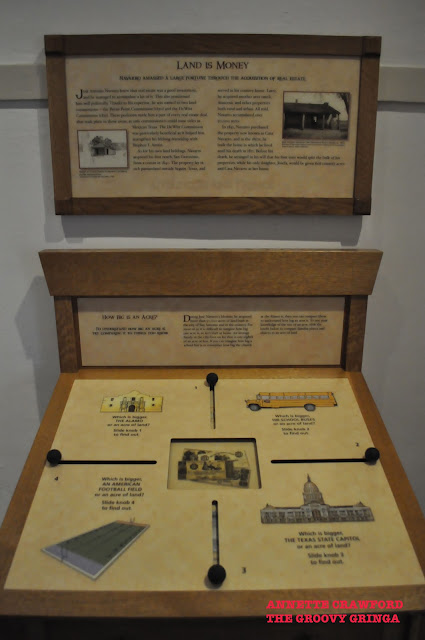 One of the many new interactive displays at Casa Navarro. The comprehensive renewal
and restoration of the site also includes LED lighting upgrades and modern exhibits.

Born in San Antonio in 1795, Navarro learned his father’s trade as a merchant and also invested in real estate. According to the Casa Navarro Visitors Guide, Navarro bought the 1.5-acre parcel of land at Nueva and Laredo in 1832. This area was then known as Laredito, a thriving Tejano neighborhood. Navarro died in the home in 1871.

On Tuesday, the grounds of Casa Navarro were filled with laughter and music. Beads and masks adorned the party-goers, because after all, it was Mardi Gras. The delicious smell of Mexican food wafted from tables in the courtyard. The event was catered by one of San Antonio’s premier restaurateurs, the Cortez Family of Mi Tierra and La Margarita fame, who also happen to be Navarro descendants.

Perhaps the most special part of the evening was witnessing something that will soon be a part of Casa Navarro…something that incorporates the history of the man and his state…something created by a man who is also an iconic legend.

If you stand in front of Casa Navarro and look off to the right, you’ll see a red brick building on Santa Rosa Street, right next to Market Square. Throughout the evening, people strolled or took a shuttle bus over to this building to see a work of art in progress – a ceramic mural created by artists Jesse Treviño and Elizabeth Rodriguez.

The massive piece of art was supposed to have been finished in time for the reception, but quite frankly, seeing it in its in-progress state was more impressive for me than the finished piece would be.

Several tables set up end to end supported the mural, which depicts Navarro surrounded by scenes relevant to his time. Some tiles are completely painted and glazed, some just painted, and some just sketched. It was humbling to see the art coming to life. When it’s complete, it will hang on the outer stone wall of Casa Navarro, facing Nueva.

The building is owned by the Cortez Family, and they went all out in setting up the studio in grand style. Bouquets of exotic flowers dotted the room and a pianist set a festive mood on an upright piano. The rich cinnamon smell of Mexican coffee lured people to trays piled high with delicious pastries.


And probably most delectable of all, scattered around the room were other works of art by Treviño – Progreso, Rosita, El Alameda and more. I was truly surrounded by greatness.

Throughout the evening, I struck up conversations with several guests, and many of them asked me: “Are you a family member?”

Tuesday night, I was.

Casa Navarro is located at 228 S. Laredo St. The Texas Historical Commission invites you to celebrate its grand re-opening on Saturday, Feb. 25, from 10 a.m. to 4 p.m. Learn more about this important place in San Antonio and Texas history by visiting www.visitcasanavarro.com.