WORTH WAITING 35 YEARS FOR


From the moment I bought the concert tickets back in July, I was filled with anticipation. I tried not to think about the show too much ... the operative word being “tried.” But that was easier said than done. After all, this was a man I had waited 35 years to see -- Peter Frampton.
When “Frampton Comes Alive” was released in January 1976, I was 18 years old and going through Air Force medical technical training. Three months later, when I got to my first assignment at Clark Air Base in the Philippines, the album was well on its way to breaking all sorts of sales records.
And the lush tropical paradise was the perfect setting to hear Frampton’s music. The dorms had more than their share of stereos on steroids -- elaborate component systems with brand names like Bose, JBL, Teac, Kenwood and Panasonic, that took up the entire wall of a room. Mammoth reel-to-reels and turntables released the music through speakers aimed at the balconies. Most nights it was like a battle of the bands. The parties were endless.
I was a teenager, I was on my own and I was living the good life on the other side of the world. Whenever I thought about Frampton, this was the world I associated it with. Understandably, when the “Frampton Comes Alive! 35 Tour” was announced, the bar was set pretty high. 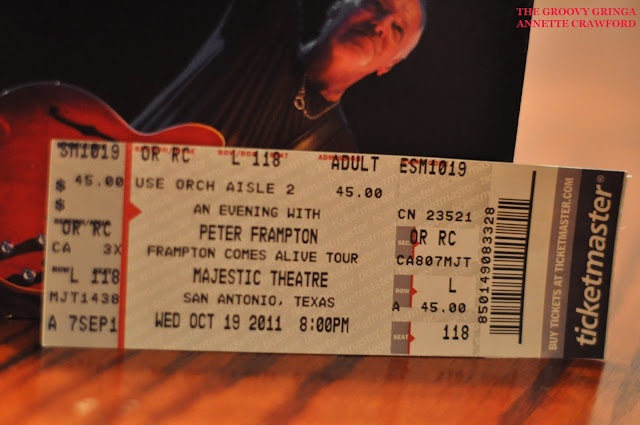 And so I found myself at the Majestic Theater in Row L, Orchestra Right Center, seat 118, on Wednesday, Oct. 19. I’m far from being a teenager, I’m back on my own again and I’m living the good life in San Antonio. C’mon, Peter Frampton, show me the way.
And he did. No longer as the golden-haired boy of the ‘70s, but as an amazing and seasoned musician. All the hype I’d heard was true -- this was the concert tour of the year.
The music sounded the same. Even his voice sounded the same ... there was no mistaking that British accent. The patter between songs sounded genuine, not rehearsed. The smile was the same. But the hair ... or lack of it ... took some getting used to. I solved that by closing my eyes. Ah, yes ... there’s the Peter Frampton I know and love.
I had been hoping and expecting a great show and I got it. What I hadn’t planned on was the overwhelming, almost physical reaction I had listening to the lyrics.
Most certainly it happened with “Lines on My Face.”
I saw where you came from
Called out your name
But there’s no answer...
That was almost to be expected. But surprisingly, the bigger reaction came with “Show Me the Way.” I got teary-eyed from the moment I heard the opening chords.
I wonder if I’m dreaming
I feel so unashamed
I can’t believe this is happening to me...
Playing the entire “Frampton Comes Alive” album took nearly two hours. Then it was time for a quick break ... and I’m talking really quick. Most folks were still headed up the aisles to the lobby when the band got back on stage. Then it was another hour of newer material, along with several Humble Pie numbers. That had quite a few people up on their feet. Who knew there were that many Humble Pie fans in San Antonio?
The whole experience was exceptional. Not only was the music itself memorable, so was the concert experience. THERE WERE NO JERKS SITTING BY US.
No one wearing hats that blocked our view. No one that insisted on standing the entire show. No one singing louder than Frampton. No one drunk and talking on their cell phone.
Amazing.
And for $35, I got a three-CD recording of the evening’s show, plus a bonus CD. I’ve yet to try out the bonus, but I’ve already listened to the show three times. I sing along in the car, and don’t care what people think if they see me.
My 18-year-old self would be impressed. 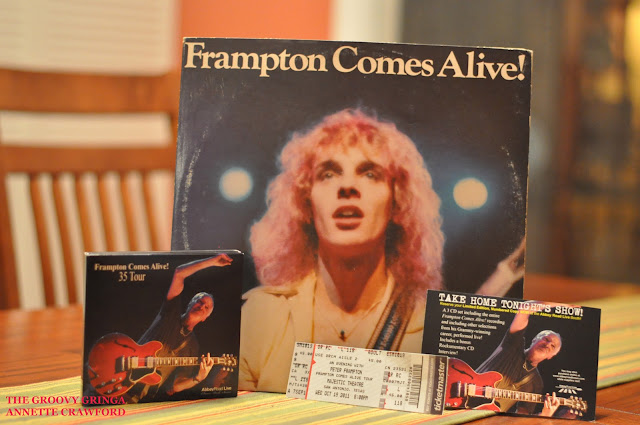 Leftcoast said…
A personalized and superbly written write-up. I'm sure my speaker system was one of those there.
October 24, 2011 at 5:16 PM