CRUZ AND HIS BLUES


A golf course in San Antonio's '09 neighborhood seems like an unlikely place to hear the blues. But there they are -- Charlie and the Cool Cats setting up their equipment at the Quarry Golf Club, with a backdrop of multi-million dollar homes lining the bluff behind them.
If you want to focus on the music, you have to ignore the clink of wine glasses, the nattily dressed patrons and their post-links chatter, and even a rainbow stretching across the sky, but somehow Charlie Cruz and his fellow musicians are able to lure you away from all the distractions.

When you hear Charlie play, you'd think he'd been playing his whole life. But even though he came from a family of musicians, Charlie was 31 before he picked up a guitar. He stumbled upon it through an unlikely source -- baseball.
"I traveled all over the state playing 4A ball," recounted the former left fielder and San Antonio native.
When he hurt his leg during a tournament in Austin, a friend asked him if he was interested in going to hear some blues on Sixth Street. He thought he knew the blues -- B.B. King and other well-known artists. But he wasn't prepared for the sound he heard that night…a sound that changed his life.
"I fell in love with the music."
That transformation led Charlie to a pawn shop to buy his first guitar. When he told the clerk he was left-handed, he was asked if he had ever played before. When he said no, the clerk asked, "Well, since you have to learn how to play anyway, why don't you just learn how to play a right-handed guitar?" It was a good suggestion and an easy decision. What was more difficult was telling his mother.
"I was afraid to tell my mom," laughed the 50-year-old. "Being married to a musician, she knew how hard that life was." 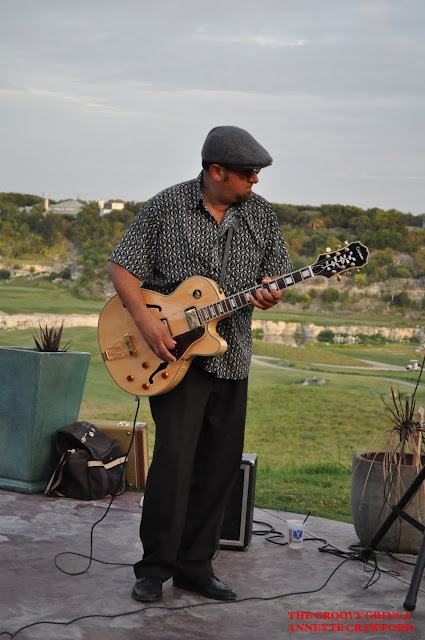 That pawn shop purchase was a classical guitar, much like the one Willie Nelson plays. He ended up giving that to a friend but now owns nine, including a sweet-sounding cigar box guitar he bought in Clarksdale, Miss. I've had the opportunity to hear him play that at Sam's Burger Joint, and let me tell you -- Charlie can make that cigar box talk. You'd swear you were sittin' at the Crossroads. 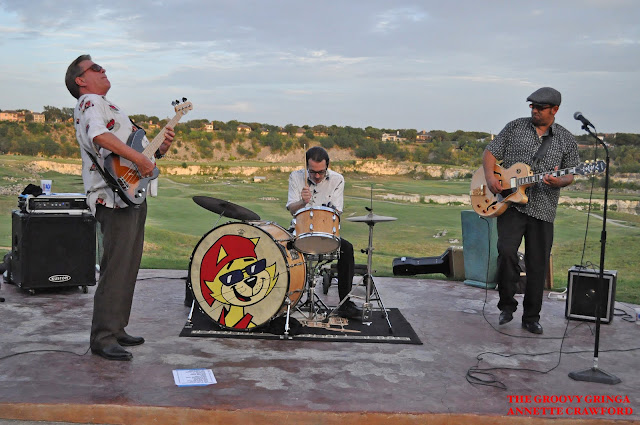 For the gig at the Quarry, the Cool Cats were a trio. Depending on the size of the venue, the number and make-up of the group can be adjusted. Expect to hear the full band later this month when they open up for Omar and the Howlers at Sam's July 30. They'll also be back at the Quarry July 21, but if you like your blues a little bit grittier, they'll be at The Cove July 9 and Tucker's Kozy Korner July 22.
While their playlist may change depending on the venue, you can't go wrong with an evening of blues, performed by Charlie and the Cool Cats.
Labels: Austin Charlie and the Cool Cats Charlie Cruz Clarksdale Crossroads Quarry Golf Club Sam's Burger Joint and Music Hall San Antonio Scott Mayo T-Bone Bland The Cove Tucker's Kozy Korner