A PASSION FOR CREATING 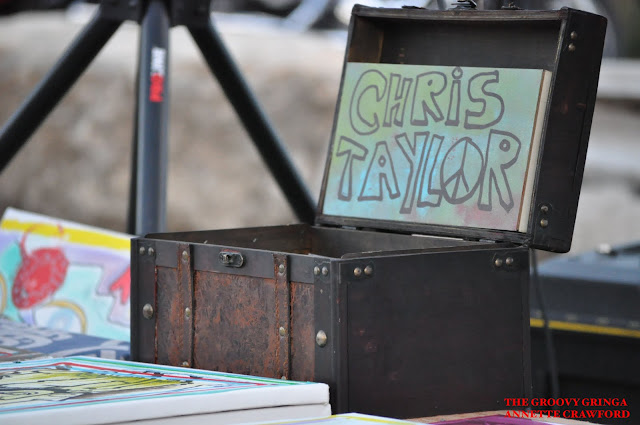 Musician, singer, songwriter, visual artist and illustrator -- Chris Taylor is an artist who lives to create. More people should be so lucky to have so much passion for their life's work.
About a year ago, I was at a Ruben V show at Luna. Ruben, a blues artist and always a generous performer, invited Chris on stage to sing a few songs. I wasn't prepared for his voice. Wistful, powerful and compelling all at once, he commanded the attention of everyone in the room with his original work.
Last weekend, I finally had the chance to see Chris again. This time he was under a canopy of trees, out on the patio of Fralo's Art of Pizza in Leon Springs. Along with a treasure chest of CDs for sale, there was also a selection of his paintings. I had the pleasure of sitting at his table with his wife and friends, along with a very un-hyper Jack Russell terrier named Jetta.

Just at the end of his first set, Chris introduced the song "Here and Gone (But Everlasting)" as having been co-written by himself and Dave Stewart. THE Dave Stewart -- formerly of the Eurythmics and an incredibly talented producer, writer and business genius. My curiosity was more than piqued.
When he sat down at the table for his break, I had to know the story. I won't pretend to do justice to his story as he did, but will relate it as best I can. 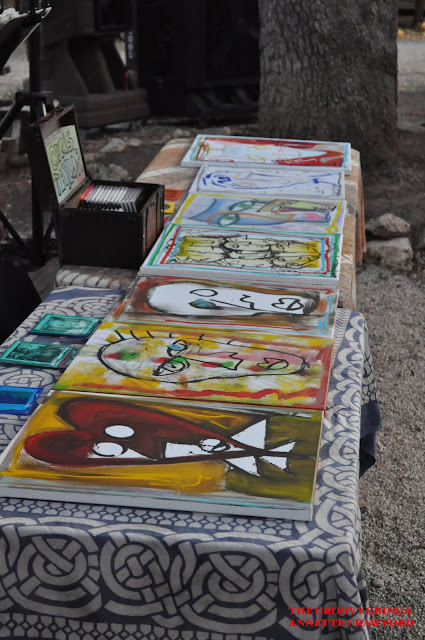 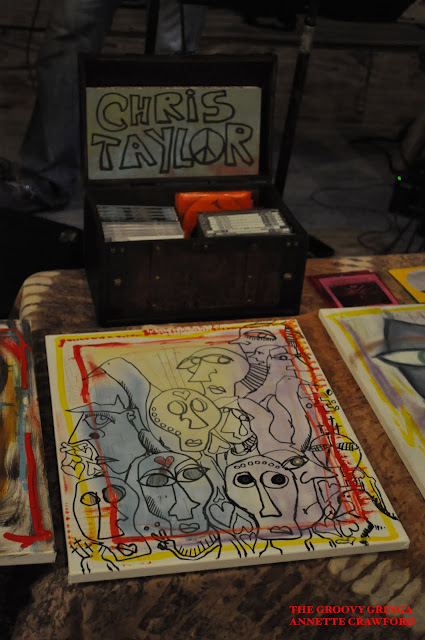 A year or so ago, Chris got a Twitter account…something he thought he should do to market himself, but not really sure how the whole thing worked. He stumbled through the mechanics of it and ended up following some artists. Included among the tweeters was Stewart.
Soon thereafter, Stewart announced a contest. He would provide the music. Any of his followers could submit their own arrangement and lyrics. He would then pick the winner.
Chris thought he'd give it a try. He already had a germ of an idea…basically, he had a Word doc that had the words "Here and Gone (But Everlasting)"…and nothing else. He was also in a time crunch. He had about 20 minutes to work with before other ventures took him away from his laptop. 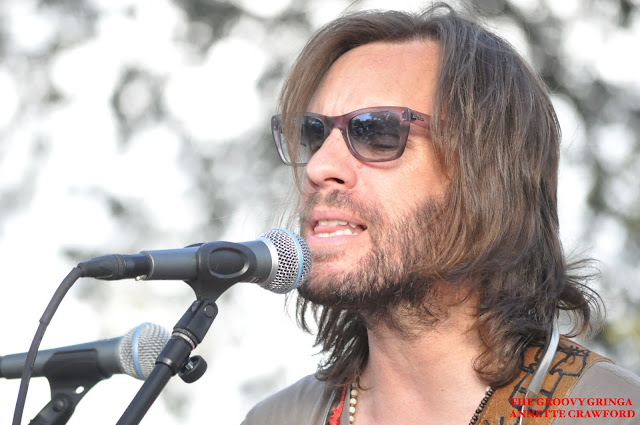 Not one who's easily daunted, Chris wrote the lyrics, the words spilling from his mind onto the keyboard. Then, using Garage Band, he imported Stewart's music, laid down his vocal tracks, added a couple more tracks of his voice as harmony and then listened to it. Satisfied, he hit send and away the song went into cyberspace…all in 20 minutes.
While he tried not to think about the contest in the following weeks, he admits the thought stayed in the back of his mind. As he and his wife drove back from Austin one day, Chris saw a tweet from Stewart, announcing that he was narrowing down the field of entries. Then, another update. Then, a tweet that said it was down to two entries. Chris dared not think one of them was his.
He got home, plopped down on his bed, opened up his laptop and there was the announcement:
"Our winner is Chris Taylor!"
It took him a second to realize he was Chris Taylor.
Fast forward a few months and Chris was in Nashville, doing some work as an illustrator. He got a tweet from Stewart, telling him that "now" would be an excellent time to join him at Blackbird Studios. Through several strokes of good fortune, Chris was able to get a ride to the studios with a friend. As they walked into the building, they strode past Lionel Richie coming out. Chris realized then that the whole evening would be one big reality check.
When they were ushered into the inner sanctum of the recording studio, they found a room full of musicians. Happy, celebrating, eating, drinking vodka martinis…it was one big party. They recognized people, including Martina McBride. And of course, there was Dave Stewart.
"Chris!" bellowed Stewart, who grabbed him in a bear hug and treated him like an old friend. It was all very surreal for Chris, but the defining moment came later on in the early morning hours when Stewart made an announcement. He told them to listen to a special song -- THE song that he had co-written with Chris.
And listen they did. Chris was amazed, humbled and grateful all at the same time. These people actually listened, many of them closing their eyes and concentrating. There was no idle chatter like so many artists have to compete with in clubs. There was nothing but the music. 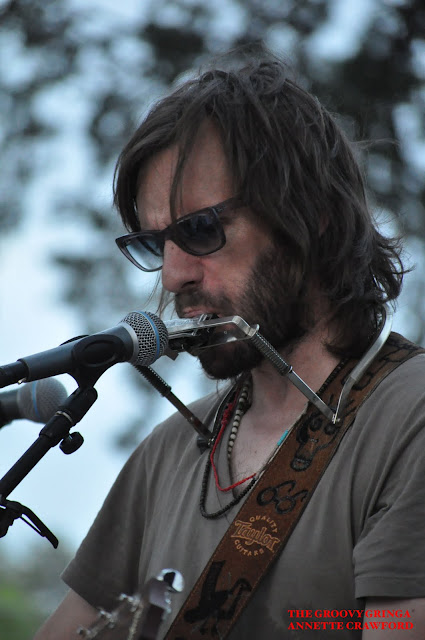 When the song ended, there was applause and praise for his work. Chris felt he was living a dream. But like all dreams it ended, and the next morning he was back at work illustrating, with the evening before just a pleasant memory.
While it would have been easy to come out of this experience with an inflated ego or unrealistic expectations, Chris has remained grounded. He has taken it in stride, but he does admit it's pretty cool to get text messages from Stewart now and then. His essence is best described in a quote on his website, www.christaylorworld.com.
"I'm interested in creating music and visual art taking in the world around me. I always have been and most likely, always will be following wherever my muse leads me. Taking pain and turning it into a melody. Taking joy and turning it into something people can see or hear. Turning sadness to laughter. This is the beauty of art. Nothing else matters. My personal journey has taken me on the dirt road to that leads to self discovery. And self discovery leads to the spirit. And the spirit leads to the Maker, The Creator. My art is born from the 'meanwhiles' of life."
Footnote:
One of Dave Stewart's newest projects is being in a group called Superheavy along with Mick Jagger and Joss Stone. Their single, "Miracle Worker," will be released by Universal July 7.
Labels: Chris Taylor Dave Stewart Fralo's Art of Pizza Luna on San Pedro Ruben V

LP said…
If seeing Chris live wasn't surreal enough, I'd say your article was. But not only do you capture his Chrisness in your writing, you have an awesome memory for a GREAT STORY!
July 5, 2011 at 8:26 PM

msvasquez62 said…
Loved the article and great pics by the way! The world is a much better place with Chris Taylor in it.♥
Margaret
July 5, 2011 at 8:29 PM

Anonymous said…
Thanks Annette. I could share a story about Chris, but his humble manner would slap me for sharing his kindness. A truly humble man, who does good behind the curtains! He is one of kindest blessings when the world kicked me in the mouth, and then invited a gang of other demons to do the same. As Christ would lead, CT unknowingly, reached thru the filth of harshness, pain and sickness, and extended a hand of grace. My children saw Jesus in life. I love this man. He just is too humble to understand "WHY".-- Shelley Norman Echtle
November 2, 2012 at 4:41 PM